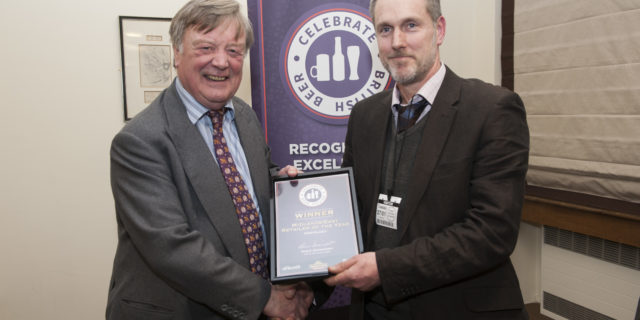 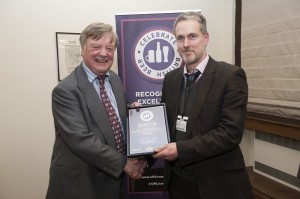 When I popped into my favourite beer shop to stock up on my favourite real ale tipples, the owner was tickled pink as he had just won a national award and been to London to receive the trophy from Rt Hon Kenneth Clarke MP. Naturally my thoughts went straight to how he could use this to promote his business and we we chatted about writing a successful press release.

We discussed the facts and I gave Nick the structure and sent him a draft for him to add in his ideas. I then created him a press release database and issued the release for him with his photograph.

The final press release is below, but this was such a good story that Nick got a phone call from the Nottingham Post who wanted to expand on the press release and make it a feature story – something everyone hopes for!

The Hopology Beer shop on Melton Road in West Bridgford has won Midlands Retailer of the Year at the 2015 Celebrate British Beer Awards which was sponsored by Off Licence News & Marstons.

Hopology owner, Nick Johnson was presented with the award by the Rt Hon Ken Clarke MP at a ceremony held in the House of Commons by the All Party Parliamentary Beer Group. The award recognised retailers promoting British beer and supporting independent brewers

Hoplogy is an independent beer shop that specialises in really good bottled beers from breweries across the UK, Europe and the USA as well as quality cider and wine. It has been open for just over a year and as well as a comprehensive range of bottled real ales, the shop also stocks specialty beer gift sets and vouchers for birthdays, anniversaries and other special occasions. It also holds meet the brewer events and tasting sessions to enable enthusiast to try out various brews. The next event on 22 February features beers from Nottingham based brewery, Totally Brewed.

Commenting Nick said ” Opening a specialist beer shop seemed like a risk worth taking as the brewing scene is so exciting at the moment. This award recognises that vision. It’s important also that I thank all of my customers and local suppliers for their support in helping the new enterprise become such a success.

He added “Hopology was borne out of my passion and interest for good quality beer. Opening Hopology has enabled me to share my passion and hopefully some knowledge about the vast array of beers on offer throughout the UK and from around the world.”