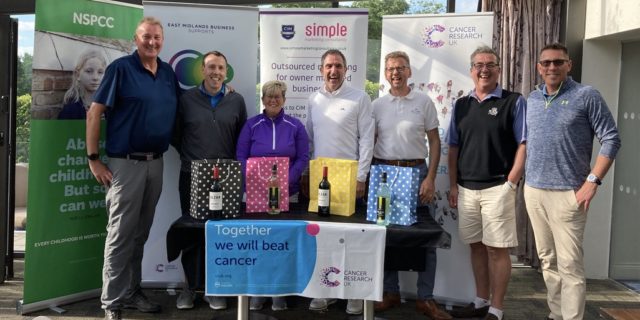 Local charity BigC LittleC is to benefit from a donation of £12,260 from 24 golfers representing six East Midlands businesses who have completed the 2nd annual “Three Bunkers Challenge.”

Styled like the infamous three peaks mountain climbs, The ‘Three Bunkers Challenge’ involves 24 golfers playing three golf courses in each of the East Midlands counties of Nottingham, Derby and Leicester in one day. The event was established by Andrew Allsop from Morley Hayes and Bev Cook of Simple Marketing Consultancy which is based in Radcliffe on Trent. Having raised £13,000 last year, Bev pledged to repeat the event until £100,000 is raised and was recently honoured with a NSPCC ‘Esther People Award’ which was presented by Dame Esther Rantzen in recognition of this commitment. 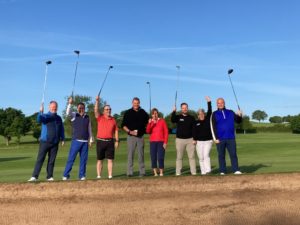 Commenting, Colin Shaw from BigC Little C said, “Each year the amount each team raises gets better and better and with donations still coming in I’m hoping we will reach at a 2 year cumulative total of £30k, so only another 4 years to go! I’d like to thank all players for rallying round to encourage donations and to all three golf clubs for allowing us to play their courses in this format.”

This year the event started at 6.30am at Morley Hayes Golf Club, then players travelled to Charnwood Forest Golf Club and concluded at The Nottinghamshire Golf & Country Club.  To make it more interesting, the team captain has to record how many bunkers the players in their team go in and then subtract this figure from their overall points score. This rule underpins the reason for calling the event “The three bunkers challenge.” 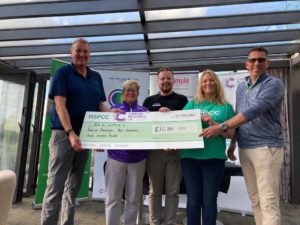 The charity Big C Little C was founded by business entrepreneurs, Andrew Springhall from Breedon Electrical Services and Colin Shaw, former Chairman of PKF Cooper Parry, who joined forces in January 2019 to create a charity to encourage businesses to organise events to raise money to support local initiatives that will support NSPCC and Cancer Research.