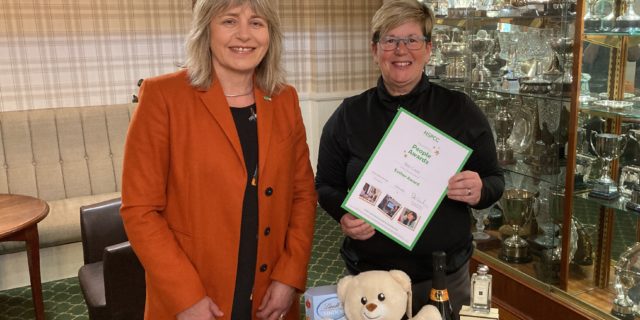 Simple Marketing Consultancy, Director, Bev Cook has been honoured with an award from Dame Esther Rantzen in recognition of raising over £5,000 for the NSPCC and an ongoing commitment to raise £50,000 for NSPCC, and £100,000 overall.

The ‘Esther People Awards’ are held bi-annually to reward NSPCC fundraisers who show innovation and ingenuity in their fundraising, particularly in the face of adversity.

The event was first planned to be held in 2020, but was delayed due to covid restrictions. Undeterred, Bev who is a Director of Simple Marketing Consultancy, based in Radcliffe on Trent, re-arranged the event for 2021 and in total raised £13,500 for her chosen charity called ‘Big C Little C’ which splits all money raised from the challenge between NSPCC and Cancer Research. In total, Bev has pledged to continue the event until she has raised £100,000.

Commenting on winning the award, Bev said “For personal reasons I have been a regular supporter of NSPCC for over 30 years. Since then, I have encouraged all past employers to nominate NSPPC as the beneficiary of charity events. Choosing them as one of my Lady Captain’s charities was a no brainer and I am thankful to all the companies and other golfers who have helped me fundraise.”

Barbara Elsey, NSPCC Community Fundraising Manager, added, “Overall there were over 300 people nominated for an NSPCC award and Dame Esther Rantzen decides the overall winner of the Esther People Award. Bev won the Esther Award because her idea overcame the many restrictions presented by Covid and has also provided NSPCC with a fantastic footprint for a novel idea that we hope other fundraisers will enjoy arranging. It also helps NSPCC to engage more with the business community.”

To make it more interesting, the team captain has to record how many bunkers the players in their team go in and then subtract this figure from their overall points score. This rule underpins the reason for calling the event “The three bunkers challenge.”

If you would like to donate here is the fundraising link. All money raised will be split 50% between NSPCC and Cancer Research,