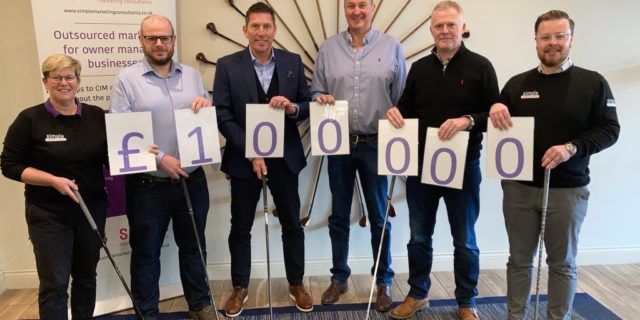 Six East Midlands businesses have tee’d off again on a charity golf challenge aimed at raising £100,000 for the charity Big C Little C which was founded to support local initiatives in aid of Cancer Research and NSPCC.

The ‘Three Bunkers Challenge’ is styled like the infamous three peaks mountain climbs, but involves 24 golfers playing three golf courses in each of the East Midlands counties of Nottingham, Derby and Leicester in one day. The event was established by Bev Cook of Simple Marketing Consultancy which is based in Radcliffe on Trent, who having raised £13,000 last year, has pledged to repeat the event until £100,000 has been raised. This year, it will take place on Friday 27 May 2022.

The winners when the challenge was held in 2021 was team Mazars who won by adding the best two players scores from each hole and then subtracting the number of bunkers all players landed in to reach their overall team score – hence why the event is called the three bunkers challenge.

This year the event will start at 6.30am at Morley Hayes Golf Club, then players will travel to Charnwood Forest Golf Club and conclude at The Nottinghamshire Golf & Country Club. The organisers welcome support via online donations or gifting raffle prizes which can be auctioned during the prize presentation.

The fundraising link is: https://fundraise.cancerresearchuk.org/unite/big-c-little-c-three-bunkers-challenge