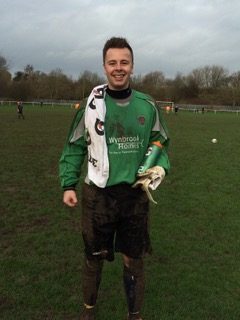 A record amount was raised in aid of HELP for HEROES in this year’s Radcliffe Olympic Football Club Boxing Day charity football match which was sponsored by Simple Marketing Consultancy.

The game was a scintillating affair, with the final result ending in a 3-3 draw, but whilst bragging rights will go to the Select 11 who retain the trophy following a 4-2 win from last year’s fixture, the important result is that a record amount was raised for the nominated charity – HELP for HEROES

Founded in 1996, the Boxing Day Match has raised over £20,000 for various charities. Once all the monies have been counted, a staggering £2,271 will have been raised, significantly surpassing last year’s total of £1,810.

John Watts, a spokesman from Radcliffe Olympic commented “The popularity of this event seems to get better and better each and every year we play this special match, and I can only thank the local businesses that help us sponsor the event, including Simple Marketing Consultancy.”

Elliot Cook, Director at Simple Marketing Consultancy and part of the Select 11 team that retained the trophy added, “Even though it was a brisk winters morning, peppared with some dubious refereeing decisions, it is always a pleasure to be able to play and sponsor the Boxing Day Match. The money raised will hopefully make a difference to the lives of some of our injured military service men and women as they look to get their life back on track.”

Help for Heroes was founded in 2007 to provide direct, practical support for wounded, injured and sick service personnel, veterans and their loved ones.